5 Tips For Holding A Supportive Conversation With A Student

It’s a challenge most teachers face on a weekly basis – what do we say to support a student who is suffering with a mental health problem? How do we begin that supportive conversation?

It’s a scary moment. We aren’t counsellors but we have been confided in. We can’t say nothing – that will seem uncaring. We want to say the right thing but we are worried about making things worse. So what can we do?

It sounds obvious but it is harder than it looks. To actively give your attention fully to a student requires a real degree of mental concentration. We listen at 125-250 words per minute but our brains think at 1000-3000 words per minute and often 75% of the time we are preoccupied, distracted or forgetful. Active listening requires the following steps:

Listen – show you are paying attention in your body language and encouraging statements such as “Ok”, “I see” and “Right”. Avoid interrupting and make appropriate eye contact.
Question – Use open and closed questions  – these show you have listened and can clarify any issues and gain insight.
Reflecting – Reflect the information back to let them know what you are seeing from their words and actions – “You have said you are ok but you seem worried about…..”
Paraphrasing – Paraphrase the information you have been given to show them you have listened and get an agreed picture. e.g. “If I am right x has happened which has led you to feel upset and worried…”
Reframing – Reframe what you have been told in a positive light. Try to diffuse the negativity and widen the meaning of an issue to allow the student to see there could be other motivations behind situations. 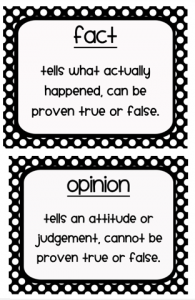 Students will often relay information they feel as confirmed fact. They believe that if they feel something bad is going happen (anxiety/worry) then it must be true. If they feel rubbish about themselves, their negative opinions of themselves must be true. Challenge them with FACT/OPINION cards.

When a student is discussing beliefs they have about circumstances, ask they whether they believe it to be a “Fact” or “Opinion” using the definitions given. This will go some way in training students to challenge negative beliefs and thought patterns that may make them perceive every day events in a way that can affect their confidence and make them feel anxious.

Shame is a big issue in anxiety – when asking students to say if something is a fact or opinion understand that to them it will feel very real so this needs to be respected. Anxiety is incredibly unreasonable and illogical  – it can make the most benign and unthreatening situations seem terrifying. 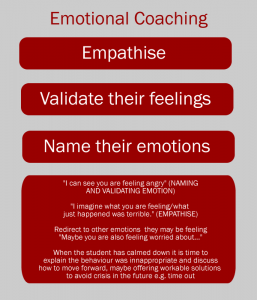 Where a student is visibly struggling either through anger, panic or crying (but also at any other time!) emotional coaching is a really useful method to calm a student and reduce the shame an episode like this can often bring about. Emotional coaching happening using the following step:

Using these simple techniques you can begin to calm a student, reduce shame and help them understand and respond more constructively to their emotions.

Sometimes taking a student through their day and asking them to choose a number from 1 – 10 for worry, happiness, mood etc can help you to start a discussion and find problem areas in the school day. This tip can also be really useful for testing is a student’s worry has reduced during your conversation – you can rate at the beginning and end of the conversation. Using numbers to recognise growing anger symptoms and leave stressful situations before problem behaviours occur. 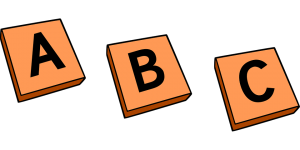 How we see the world depends on our own beliefs about situations. Sometimes students may have a perspective that is damaging to their mental health due to thought distortions. Let’s have a look at a situation:

ANTECEDENT – Student’s friend ignores them
BELIEF – Student assumes that the friend is angry at them and doesn’t want to be friends anymore
CONSEQUENCE – Student keeps their distance, is angry and upset. Leads to further isolation

ANTECEDENT – Student’s friend ignores them
BELIEF – Student believes that student must be having a bad day
CONSEQUENCE – Student tries again with friend later on, asking what is wrong and trying to help.

By allowing a student to recognise how their beliefs about events influence their behaviour, they can learn to judge situations differently to have better outcomes for their own mental well being.

About the Author: SEMH

This website was designed to help education staff to support students with social, emotional and mental health concerns.

We are keen to hear from schools and individuals with strategies to help support students so if you would like to contribute, please get in touch via the “Site Owner” link above and make contact via Linkedin.

Students with SEMH needs bear the greatest disadvantage of all – one for which a cash premium itself will not resolve. If not addressed they will carry this with them throughout life despite economic prosperity or social mobility that often is deemed to resolve other “disadvantages”.

Furthermore social, emotional and mental health (SEMH) can hinder a child’s ability to access education leading to their opportunities being significantly reduced.

We aim to address this with strategies for all schools and education professionals to use without huge cost and specialist expertise.

As an Amazon partner, some of the links posted on here will earn commission that goes towards the cost of maintaining this website.

Always communication even if they can’t express why #semh #believeinsuccess

Every behavior is a form of communication. 🙌
#HackingSchoolDiscipline
📷 @ASCD

#protip If you really want to upset a group of #SEMH students, keep calling their favourite band the Chilled Boiled Bladder Crew.

Children who are able to identify, understand, express & manage a wide range of feelings experience long term benefits to their mental health & wellbeing.

To help children explore, express & name emotions we have a a range of resources for all ages. #eyfs #semh #psed

Whole session+all participants re-located last min as a pupil was having a distressed incident where we were scheduled.

This website uses cookies to improve your experience while you navigate through the website. Out of these cookies, the cookies that are categorized as necessary are stored on your browser as they are essential for the working of basic functionalities of the website. We also use third-party cookies that help us analyze and understand how you use this website. These cookies will be stored in your browser only with your consent. You also have the option to opt-out of these cookies. But opting out of some of these cookies may have an effect on your browsing experience.
Necessary Always Enabled
Necessary cookies are absolutely essential for the website to function properly. This category only includes cookies that ensures basic functionalities and security features of the website. These cookies do not store any personal information.
Non-necessary
Any cookies that may not be particularly necessary for the website to function and is used specifically to collect user personal data via analytics, ads, other embedded contents are termed as non-necessary cookies. It is mandatory to procure user consent prior to running these cookies on your website.
SAVE & ACCEPT
Go to Top